For Seasol, the grass is greener with Phocas

For nearly 40 years, Seasol has been delivering outstanding results as a plant health tonic and soil conditioner.

Seasol supplies its range of home garden care products to more than 35 retail partners in over 2,000 locations across Australia.

The company’s largest retail partner is Bunnings, the leading retailer of home improvement and outdoor living products in Australia and New Zealand.

Bunnings sells more than 45,000 products in 300+ locations across Australia.

Because it offers choice to consumers competing products are frequently positioned side-by-side. Seasol recognized that it needed to have the right data analytics solution to monitor product performance and inventory levels to excel in highly competitive sales channels like Bunnings.

Running sales and inventory reports was time-consuming and complicated. An internal analyst had to wait for a weekly inventory report and manually enter the information into a spreadsheet. They had to then try and present it in a way that made sense before sharing it with sales managers. The results were usually confusing and the time it took to generate reports meant decision making was based more on guesswork than hard facts.

There has to be a better way

Rohan Butler, general manager of the home garden division at Seasol had used Phocas for internal sales management and budgeting in a previous role and recommended it to his CEO. After assessing several BI solutions Seasol chose Phocas for its ease-of-use and no-fuss functionality.

The nature of Seasol’s product range means it is heavily affected by seasonal fluctuations. Sales can grow by 400% in a short period of time based on weather conditions, and Rohan decided to put Phocas to the test.

“We can be selling 9 units of fertilizer per week, and all of a sudden the sun comes out and bang, we’re selling 100 units. Phocas gives us the power to quickly see what stock is low by product segment, territory, and by store and then act,” said Rohan Butler, general manager, home garden division at Seasol.

The immediate nature of the information means management can do a virtual ‘walk through’ of any store and get a good snapshot of sales, inventory levels, trends and opportunities.

“All in all, it’s been a great investment for us, and we’re very happy with the performance,” said Rohan.

Near real-time data sows the seeds of success

While Seasol has introduced Phocas to all functions of the company, it is used most effectively by the sales team that now access and analyze up-to-date data without having to rely on IT.

It has made it easy to customize and monitor important KPIs to help Seasol sell more products, improve stock management and ensure full and appealing product placement across all retail partners.

Sales managers at Seasol now look at a live dashboard and easily drill down through their transactional data in the Phocas grid to answers questions, find new opportunities and get to the root of issues before Bunnings raises a concern.

“There’s nothing worse than having a buyer like Bunnings call you up with a complaint. Now we can go to them first and say, ‘this is a potential issue, but this is how we are going to fix it.’ It’s really strengthened our relationship.”

One of the things Seasol is most impressed with, is that sales reps can now go into a store with their iPads and go through that store’s performance - presenting current data. 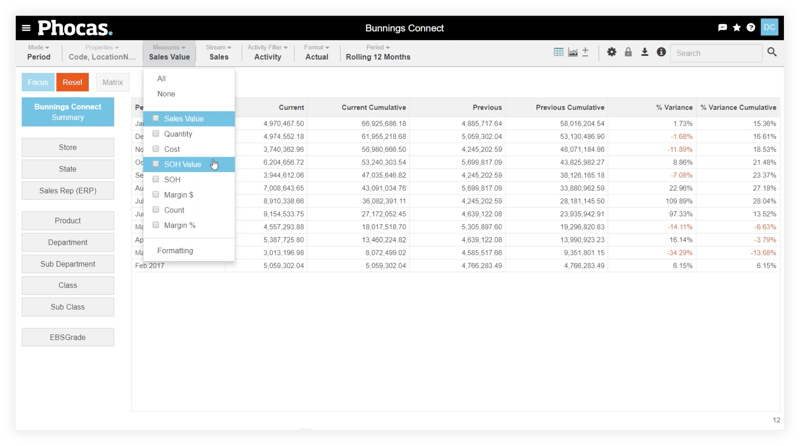 In this eGuide for Bunnings suppliers, learn how you can improve your sales, profit margins, stock management and more.

See how you can unlock the value of your Bunnings sell-thru data.

Download your free Bunnings supplier eGuide by completing the short form on the right.