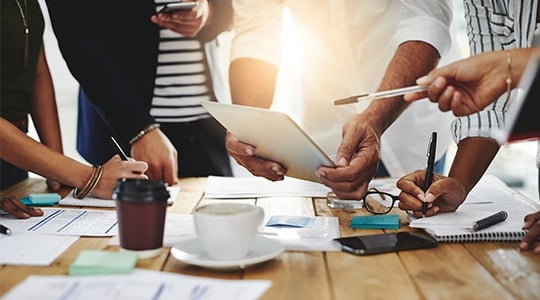 Seems simple enough. But a tendency exists to conflate BI with analytics, which can be best thought of as the compilation of that real-time data. So, BI isn’t about accumulating data. It’s about getting results from that data.

And these results should reflect company performance, as well as identify trends, track key performance indicators, and streamline collaborative, strategic decision-making within a market. When in 1993 renowned management guru Peter F. Drucker uttered, “Knowledge has become the key economic resource and the dominant, if not the only, source of competitive advantage,” he presaged the entire digital BI movement.

So, if aggregated, real-time BI statistics can steer strategic decisions within a B2B market segment, statistics about the use and adoption of BI solutions within that market may guide decisions on how best to parlay BI software use into marketplace advantage.

The following statistics, gleaned from Dresner’s two reports, shed ample light on the direction that BI software solutions are taking as we approach the final quarter of 2018.

Users of both on-premise and cloud BI solutions identify dashboards as the feature essential to a company’s BI adoption. More than 96 percent of respondents identify this feature as critical. In a close second place, running reports was regarded as “important” or better by 94 percent of respondents. Self-service (89 percent), data warehousing (81 percent), and advanced visualizations (87 percent) round out the top five demanded features.

The conclusion: users want plenty of data, available at their fingertips, in easily digestible format. Figure this trend to continue.

Besides dashboards, the most popular BI features that users want in a BI solution include enterprise collaborative frameworks, integration with a cloud provider, third-party data sources and connectors, and licensing types.

In terms of the most preferred cloud provider from which to operate a public, private or hybrid cloud, 86 percent of respondents chose AWS, 82 percent chose Microsoft’s Azure and 66 percent chose Google.

Finally in terms of tools, respondents indicated their preference for licensing options. Not surprisingly, those BI solutions offering a free trial were deemed critical by sales & marketing teams and important by executive and IT teams. Sales and marketing, IT and finance teams also acknowledged subscription licenses as important.

However, when it comes time to signing up for a cloud BI solution, subscription licensing wins. More than 92 percent of respondents acknowledge using this type of license. Still, on-premise BI licensing earned 83 percent of respondents as users (equaling that of free trial), and managed services licensing garnered a 50-percent ranking. The last three licensing options included perpetual license with an annual maintenance contract (36 percent), freemium (30 percent) and pay-per-use (10 percent).

The trend for subscription licenses seems the predominant choice in the market. It is expected, however, that on-premise and free trial licensing will continue to gain adherents because of security concerns for the former and “deals” for the latter. Survey results continue to reflect declining usage trends for perpetual licensing, freemium, and pay-per-use.

User sentiment toward Cloud BI solutions has spiked upward significantly, driven by increasing endorsement from sales and marketing teams, as well as ready adoption by small- and medium-sized businesses (SMB). More than 72 percent of respondents deem BI use important or critical, a nearly 10-percent jump from 2017. More than half of four of six functional teams (Sale/marketing, Finance, IT, and Executive/Management) deem BI important to company success. And the smaller the company, the more critical or important the adoption of BI.

In terms of sentiment toward cloud BI by industry, more than 88 percent of Finance, Technology, and Retail/Wholesale respondents consider cloud BI to be important, very important or critical.  Expect this trend to continue as more software moves to SaaS platforms.

Overall, industry sentiment toward cloud BI continues to gain momentum. The degree to which users of cloud BI solutions assess its importance has remained consistent over the past two years. More than 62 percent of users label it as critical to their company’s performance and success.

4. Current use and future plans of cloud BI

Current use and future plans for cloud BI have increased markedly in 2018, thanks to SMBs and financial services firms, both of whom have reported earning a distinct advantage through market insight. Nearly 50 percent of respondents admit using cloud BI, nearly doubling the admission from 2016. Conversely, the number of respondents indicating they have no imminent plans to use cloud BI solutions has shrunk by more than half in the same period.

The teams most likely to use BI now and in the future include Sales/Marketing and operations teams, both lodging BI-use favorability rankings between 60 and 70 percent.

The trends are apparent: adoption and use of BI solutions are on the rise; disregarding BI isn’t fashionable; and BI works for all teams.

More budgeting for BI looms in boardrooms. Among those respondents who acknowledged increasing cloud BI spending, 37 percent will increase private cloud spending and 36 percent will increase budgets for public cloud. This trend correlates with a preference for private - over public - cloud networks.

Survey results reflect a gaping shortfall in user awareness toward cloud BI security standards and requirements. This statistic deals with security protocol (e.g., ISO 27001, BYOK, Soc2 Type2 and HIPAA) awareness on the part of the user. Nearly 60 percent of respondents checked “Don’t know” regarding these issues, a nearly 33-percent increase over the previous survey.

Across company teams and functions the story is the same. Less than 20 percent of respondents acknowledged familiarity with any particular cloud BI security standard. Marketing and Sales teams were the least savvy, with more than 70 percent admitting to knowing little to nothing about security standards.

No matter the type of cloud platform being used, support for a respective version exceeds 70 percent of respondents. The cloud BI platform is here to stay:

In terms of business intelligence collaboration, a couple of trends should be pointed out. First, 54 percent of respondents say sharing BI content in a group-based decision-making process is critical for company success. Second, another 34 percent say collaboration is very important. And it should come as no surprise that not a single respondent reported BI collaboration as not important.

It follows, then, that more than 66 percent of respondents indicated their company’s teams share information either all of the time or some of the time.

Best practice for sharing information includes “closed loop,” where data is shared among teams that analyze it before making a strategic decision and then implementing it. More than 57 percent of respondents reported their companies engage in closed loop sharing.

However, ad-hoc actions across functions garnered a higher percentage of execution, with nearly 70 percent of respondents saying they share information in this random manner.

So, with props to Dresner Advisory Services, anyone seeking to ramp up their company’s adoption and use of BI software has been given a statistical cross-section of BI adoption and execution trends.

Use them at your discretion - and to your advantage.

Keith Craig is Better Buys’ Content Marketing Manager. He has more than a decade of experience using, researching and writing about business software and hardware. He can be found on Twitter and LinkedIn.

Would you like to learn more about the benefits of Phocas business intelligence for your business? Watch our 4-minute product demonstration by clicking here, or on the button below.