Ozsale discovers a reporting solution to keep pace with its business

As online shopping grows in popularity and in sales volume, so too do the companies trying to carve for themselves a slice of the market.

One company that has succeeded to attract numerous customers in Australia, with its targeted approach of selling heavily discounted designer brands, is Ozsale.

Ozsale is a member-based online shopping club. Anyone can sign up and become a member. Louise Meade, Menswear Category Manager, says:

“Each day, members receive a personal invitation to the most exclusive sales events for men, women, kids, home, beauty, wine and more – at up to 80% off retail. Sales start every day, seven days a week and typically run for 2 to 3 days. 60% of stock is usually sold in the first 48 hours so getting in early is strongly advised!”

Ozsale has dedicated buyers in Australia, Europe, Asia and USA who spend their days (and sometimes nights!) searching the world for the best products and negotiating deals direct with suppliers to offer exclusively to members.

Ozsale now has over 8.75 million members and has expanded into a number of locations in Asia Pacific.

The challenges of expansion

As the business grew and expanded the ability to track sales by product line and to obtain reports about the performance of the business became a significant challenge.

Their main warehouses in Sydney, Los Angeles and the UK receive 20,000 garments per day, and then distribute those garments to various locations across Australia and Asia Pacific. They needed a tool that would allow them to:

“Prior to having Phocas, getting the history of a previous sale/brand was time consuming and difficult. Instead of getting all history for one brand instantly like we do now, it was a slow process of collating data, sale by sale, month by month and inputting it into excel”, recalls Meade.

According to Meade, they tried developing their own in house reports through excel and other programs. The problem was that the number of reports required was never ending and the ability to get the data needed was too slow.

“With the tools Phocas gives me, I can use data to build my budgets and forecasts.”

To address their reporting and data analysis needs Ozsale turned to Phocas BI for a solution.

“Phocas is very easy and intuitive to use. Its ability to analyse large amounts of data in a few simple clicks of the mouse is outstanding. Learning how to use Phocas was quick and simple. A quick 10 minute demonstration is all it takes to get a new user up and running. I would be lost without it.”

“The first thing I do every morning is check my sales results from the previous day. In a fast paced environment this is crucial as it gives me and the rest of the team time to react. With the tools Phocas gives me, I can use data to build my budgets and forecasts. It gives me the ability to quickly lookup and compare suppliers and sales on a month by month basis. This means I can quickly drill down on a supplier and their sales to build future budgets and forecasts.” 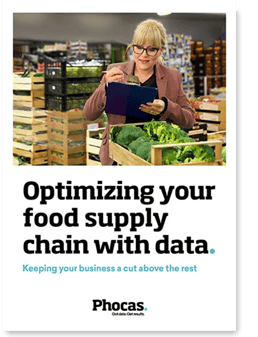 In the food distribution industry, delivering in full and on time helps ensure food safety and product freshness — not to mention high customer satisfaction and increased profits — which is why knowing the ins and outs of your supply chain is crucial. And data can help you get there.

Download our free eGuide to find out how data can help your food distribution business: